Bet on the Election

The majority of the people may think that there are no people betting on various political happenings and the outcomes around the world and that it is usually a waste of money and time.

However, what most people have failed to realize is the fact that so much money is generated when people bet on the election outcomes and events.

Bookmakers worldwide have included political betting to their markets as a result of the increasing popularity as well as the demand.

Since there is usually some kind of congressional nomination or election taking place somewhere in the world, the bets are usually popular among punters.

Of these bets, the most popular one has been the United States Presidential race, which has been hotly contested over the past few years.

The advantage of the online sports bookmakers is the fact that you can not only bet on your favorite politician, but you can as well bet on the election’s outcome all under one slip.

In this article, we are going to have a look at different betting types as well as odds that you can bet on the election as well as go through some examples.

How to Bet On Election Outcomes?

In elections betting, you will find yourself limited to two kinds of betting which include the money line bets and straight up bets.

This is because of the overall range of politics, unlike sports, is narrow forcing the various online bookmakers to offer only these two types of bets.

This is one of the bets that you can place when you bet on the election outcome. In the election money line bets, you will wager on the number that a given candidate will win by.

For example, in the 2016 United States election, you can decide to bet on Donald Trump to win by 51% of all the States found in the US. This is an example of a money line bet.

Money line bets are fun due to the fact that you can bet straight up on a single candidate and place a bet on whether another candidate will take a state.

This is the second type of bet that you can use to bet on the election. It is also the most placed type of bet, which the majority of punters use to place their bets.

It’s usually a wager on the favorite to win the next election. The odds are usually given to each of the elections candidates before the elections kick off, and it's up to the punter to decide on who will win.

The favorite candidate usually has lower odds while the underdogs will normally have high odds.

In the Paddy Power election market above, Hilary Clinton is the favorite to win the elections at the odds of 2/5. Joe Bidden, on the other hand, is the least favorite candidate to become the next POTUS hence the odds of 33/1.

The US Presidential Elections

This is probably the most watched political and popular election worldwide. The reason being the presidential elect is normally considered to be one of the most influential people in the world.

With HE Barrack Hussein Obama completing his second term, there is a lot of enthusiasm surrounding the ongoing primaries and a lot of people are eagerly waiting to see who will represent the Republicans and the Democrats in the final election that will be held in November.

It’s the best time for most of the punters from across the world to make money.

If you are planning on placing a straight up bet, it would be advisable that you wait until the two nominees are selected so that the odds can go high towards the end of the election.

It usually features candidates who are vying to represent the people of the United States in their various congressional districts.

Which is Some of the Best Bookmakers to Use, when You Bet on the Election?

Ladbrokes have a long history of offering punters a chance of making money online and just like some of the top online bookmakers in the UK and Ireland; it has great opportunities and markets for you to bet on. 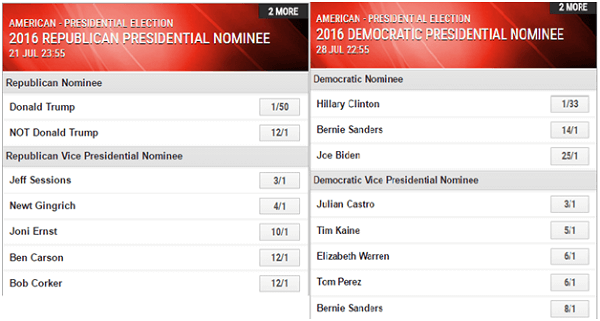 Just like Ladbrokes, the top Irish Bookmaker has plenty of betting options available for you. In the 2016 US general elections, it has included a number of options such as the winning party, the next POTUS, the democrat and republican VP candidate as well as a cheeky “Trump’s Manhood” option.

In addition to the options mentioned above, the UK giant also offers you a chance to bet on election by offering you other markets such as the UK, Ireland, and Australia politics.

Each of the mentioned options has a sub-division in which you can bet on as you wish. 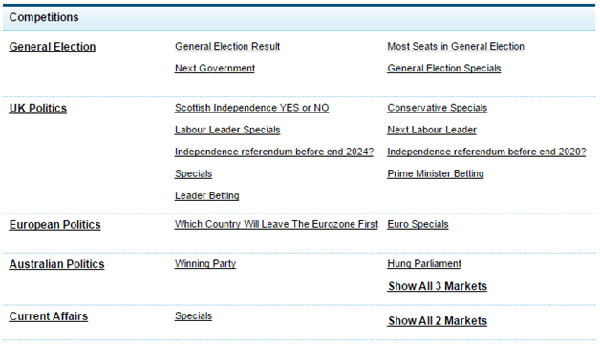 The current affairs section has up to date markets that enable you to make a bet on trending political matters.

For example, the have the “Economy Special - Will the UK enter recession by the end of 2017?” priced at 1/3 for No and 9/4 for yes. Also, they have the “Next UN Secretary General” markets as shown below.