The political arena is always fun and exciting, and the 2016 election has not spared us the drama.

The developments that take place on each passing day tend to re-define the General Election Odds at Betfair with the recent sensational one being Andrea Leadsom’s withdrawal from the race which has left Theresa May to become the prime minister. 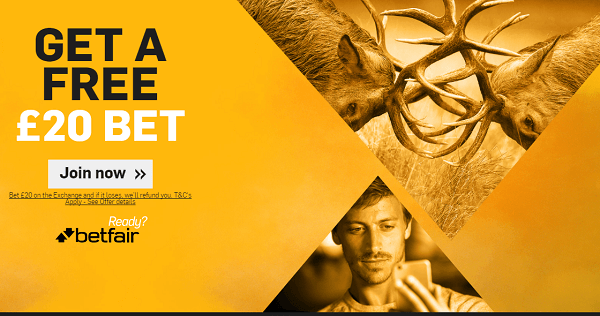 The odds on a General Election in 2016 have shortened tremendously following the confirmation that the Conservative party will not restart the leadership contest.

As a result, general election odds Betfair have reduced to 3.5, and this is expected to be the trend.

David Cameron announced his resignation as prime minister and left office to that effect.  Theresa May is likely to take over the seat, and nothing seems to be standing in her way.

The odds are set at 1.01 showing no possibility of any twists in David Cameron’s succession. The question on everyone’s mind right now is when the Home Secretary will acquire the position?

This is likely to take place this week or even today, who knows? Chancellor George Osborne has predicted that Theresa will be taking over as prime minister in a few days, but we all need to wait and see. 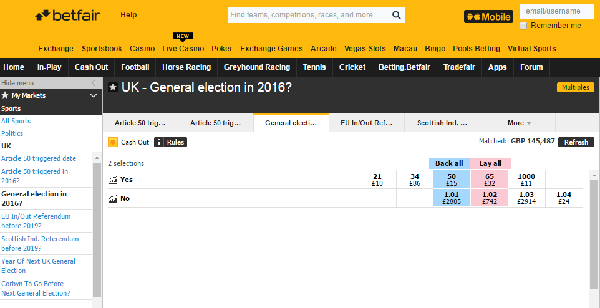 Gamblers worldwide have reacted to the recent developments surrounding the UK politics.  This is clearly reflected in the narrowing of the odds of a general election in 2016.

Just last weekend, the odds of having a general election this year stood at a comfortable 50 since Theresa and Andrea had both shunned the idea.

The recent turn of events have fuelled up the idea that the people of this nation should be given the opportunity to choose their leaders, and this is likely to be the case.

Labour Party was fast to call for a General Election. John Trickett, the election coordinator, said that it was very essential to have an election due to the instability of Brexit and the coronation of Theresa May as prime minister.

The party, however, has its internal wrangles that need to be resolved.Leadsom’s withdrawal from the race to leadership greatly overshadowed the announcement that Angela Eagle would be challenging Jeremy Corbyn for the leadership of the party.

Women are quite determined to take over the leadership of the country. Angela wants to oust Jeremy from the seat, and Labor MP Owen Smith is also eyeing the same position.

Is there a possibility of an Angela Eagle vs. Theresa May general election in 2016?

Absolutely, Owen Smith has been given a 5.10 odd of taking over the leadership of the party which is quite discouraging for anyone who wants Jeremy Corbyn out.

The former business secretary has a 4.30 odd of taking over the leadership of the party, and this could go down. Other likely contenders for Labor Leadership are David Miliband, Dan Jarvis, and Hilary Benn, and this is likely to be an interesting race. 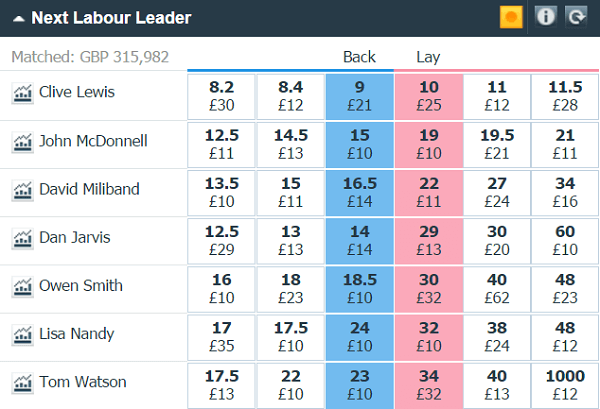 The earlier the party sorts its issues, the better the chances of standing a chance in the leadership of the country.

Theresa should expect a bounce in opinion polls after beginning her time in number ten although general election odds Betfair are predicting that the most probable result would be No Overall Majority 2.26.

A Tory victory follows quite closely at 2.30 whereas a Labor Majority is at 6.60.

The race for the leadership of the Conservative’s party has always been filled with upsets and unpredictable turn of events that has denied punters the right to critical analysis and forced them to back the early favourites. However, the early favourites always fail to win.

This is history that has repeated itself since the legalisation of betting shops are making the Conservative leadership odds a nightmare to punters.

In theory, this is bad news for May although this race looks different.

It began before the previous election after Cameron declared that he would not run again.

The favourites for the seat were George Osborne and Boris Johnson who seem to have lost even without officially entering the contest. We saw many disappointed faces when Johnson surprisingly failed to run for the seat.

The history of the party explains the reluctance bettors are displaying in piling odds for the favourite, but Theresa looks sure.  Liam Fox will surely be eliminated first.

May has a lot of backing from the current situation in the country. There is a big difference from the election of David Cameron, Duncan Smith and William Hague. In all these situations, the Conservative party was selecting an opposition leader many years before the next election.

However, this time, the party is choosing someone who will ascend the corridors of power at a pivotal and fractious time in the history of the nation when it needs a strong sense of direction. 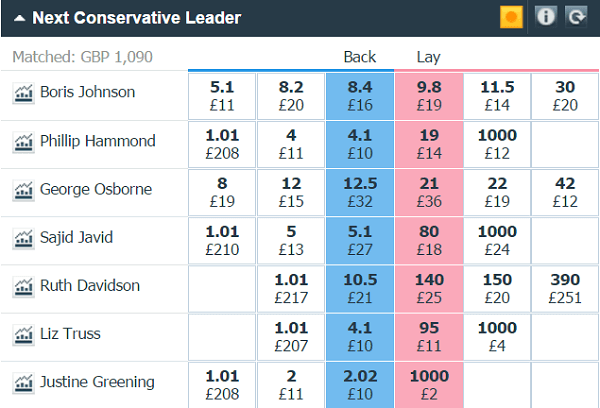 Hence, the Home Secretary is the most qualified person to take the seat, and this explains why she is leading in endorsements.

She has many supporters from the Leave side in the referendum even though she supported the Remain side.

This is a worrying trend for her competitors as it shows that she is seen as the most experienced unity candidate who is competent for the big job.

The Betfair general election has shown this by awarding her 1.01 odds of becoming PM.

Liam Fox is likely to be the first to be eliminated from the race after the first round. He has 1.11 odds of being the first and he is the inevitably the favourite for the position.

No citizen in the UK expects him to be a leader and even the Brexiteer MPs whom he was loyal to agree to this. The second from last is Crabb, who should not be underestimated in this race although Liam’s case is almost done.

The Betfair General Election is fun and exciting.

Punters all over the world are hoping to reap big from the politics of the UK, but the upsets will always be there; so follow the game closely and do not be left behind as we win big from simple predictions.