There is no doubt, that gambling on various happenings and events has been prevalent for many centuries.

Gambling could be some gaming events, sports events and in politics and other such events. Today, predicting the outcome of political events is a big past time, and it is a big money spinner and could be worth millions of pounds.

Today, we will have a look at the British electoral scene. Whenever we talk about the electoral battle in the United Kingdom, we are basically talking about two major parties, i.e. Conservatives and the Labor Party.

Though there are others like Liberals, the battle is always between these two main parties. Of late, it has been found that The Conservatives have been doing quite well and have won the previous few elections.

The next elections are quite a few years away, and it is scheduled to be held on May 7, 2020, which is almost three and a half years from today.

However, there is a lot of activity happening now especially amongst those who are keen on betting and making some money out of the elections which could be quite some years away.

We will, therefore, have a look at odds on Conservative victory because as of today, they seem to be the favorites.

There are others who feel that Labor could be a making a strong comeback, especially after the Brexit vote which was shocking, saying the least. It led to the resignation of David Cameron and Theresa May became the new Prime Minister.

The Parameters on Which Betting Is Done

It would be pertinent to mention that there are a few parameters based on which betting is done as far as UK elections are concerned.

When one talks about odds on Conservative victory, there are a few more important points which need to be considered.

The Conservatives Hold the Edge

A lot of betting is also done on deciding as to who will win the most seats apart from betting on party switch specials and various other parameters. However, we will try and restrict the next few lines mostly to the Conservative Party.

This is because Labor is still in a stage of rebuilding the party and has been badly bruised over the past two elections and as of today, the Conservatives seemingly have a vice-like a grip over the political spectrum of the country.

It Would Be Premature to Be Sure

But these are still early day, and it may be too premature to say for sure that Conservatives are well and truly home and dry as far as the 2020 elections are concerned.

However, one cannot deny the fact that the odds are very much in favor of the conservatives and punter are ready to put their money behind this political party for obvious reasons.

Hence, whenever political gambling and election gambling is being talked about, there are reasons to believe that it is Conservatives all the way at least for now.

A Look at the Odds in Greater Detail

In other words, eight times your prediction will come out try. In such a case, it is likely that you will not be able to win big jackpots because there could be millions who could be perhaps placing bets for Conservative win on the same odds or even something which is even more radical.

Hence, as things stand today, if would not be possible for you to win big money just by predicting and gambling on a Conservative win as far as UK elections are concerned.

How Then to Make Big Money?

In a situation where the odds are heavily loaded in favor of the Conservatives, if you are keen on making big money then it is obvious that you must look at other options.

You could perhaps look at the total number of the seat, which would be won by Conservatives if elections were to take place in 2020.

You perhaps could hazard a guess regarding the seats that would be won by this party if the elections are advanced a bit earlier and held perhaps in 209 or even 2018.

However, given the comfortable majority which Conservatives have today, it is highly unlikely that they will have any reasons to advance the elections even by a few months.

The Next Leader of Conservatives

Yes, this is an area where one could put in their odds instead of predicting the winner in the next elections. The election of a new leader for the conservatives could be quite close, and it would be wrong to assume that Theresa May is a foregone choice for the next elections. 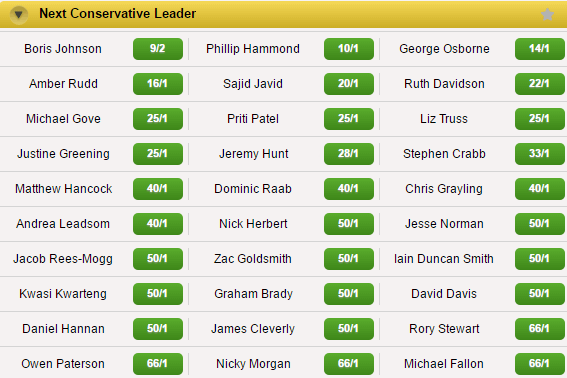 Many new leaders are waiting in the wing, and therefore it could be a close call. If you can take a calculated risk and bet on somebody apart from Theresa May, you could stand the chances of winning a larger amount because the odds could be heavily stacked against such a candidate.

Another big area where you perhaps can rake in the big moolahs is by trying to have a reasonably accurate fix on the overall number of seats to be won by Conservatives.

As per the current betting odds for every £4 pounds, you will bet on this parameter; you will be able to win only £1 if the betting happens to be correct. This certainly means that Conservatives are well and truly deeply entrenched and favored to win even in 2020.