Odds on Next UK Prime Minister

There are some political events which are followed very closely around the world and of course in our country. Though many of us might state that politics is the last refuge of bad people we continue to follow it very closely.

This is because politics impacts us daily and whether we may hate or love it, there are quite a few things pertaining to our daily lives which are impacted by politics.

It could pertain to jobs, health facilities, homes, social security network and much more. Hence, there are quite a few things which have a direct impact as far as political happenings are concerned.

The next election in the United Kingdom could be more than a year away, but it certainly has attracted quite a bit of attention amongst those who matter the most.

It would, therefore, be interesting to have a closer look at the events which could lead to the election of the next Prime Minister as far as the United Kingdom is concerned. More importantly in this article, we will focus more on the odds on next UK Prime Minister

Odds on Next UK Prime Minister

Historically, when it comes to elections in the United Kingdom, there are basically two main contenders. They are the Labor Party and the Conservatives or Tories as they are also referred to.

There could be others like the Liberals, but they do not have the kind of reach and popularity which could make them as serious contenders.

At best, they can play spoilsport and damage the chances of some of the main contenders in some limited seats. Hence, when we talk about odds on next UK Prime Minister, we would do better to restrict only to the above two mainstream parties.

If we look at bookmakers, there are reasons to believe that Boris Johnson who is a Tory MP and the Secretary of Foreign Affairs and Commonwealth could have a reasonably bit chance when it comes to being nominated as the next Prime Minister of the country.

Though these are still early days, there are reasons to believe that he might find acceptance amongst big sections of the Tory Party. 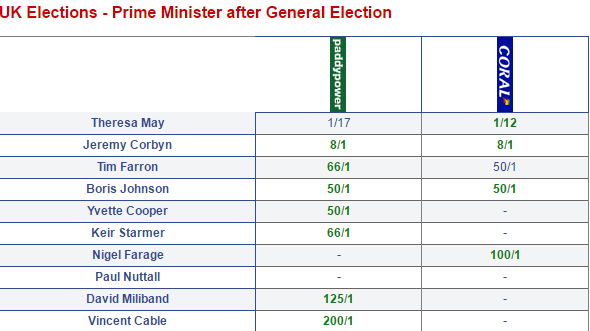 Though Theresa May is the incumbent Prime Minster, many believe that she at best could be a stop gap arrangement.

Not many are ready to give her a big chance as far as the next UK elections are concerned. Mr. Johnson has a good odd of 5/1 in his favor.

It may not look exactly very dependable and reliable, but with the passage of time, there are many bookmakers who believe that this odd of 5:1 could improve even further towards his favor.

Jeremy Corbyn is another powerful candidate who could be nominated as the leader of Tory Party, and he certainly is a name worth watching.

Though he might be trailing behind Johnson and could be with an odd of 6/1 in his favor, he has every reason to catch up with Johnson.

This is mainly because his candidature has also been found to be suitable by many punters and bettors. Hence, if we take a combination of punter and bookmakers and juxtapose them with the internal politicking of Conservatives, then we may not be surprised to see him leading Tories to the next elections in 2018

As far as the Labor party is concerned, there is no denying the fact that it is going through a rough patch and it has been out of power for quite some time.

Therefore, they have quite a bit of hard work to do, and it remains to be seen if they will be able to find out the right person to take on the heavyweights of Conservatives who seem to be very well placed.

However, there are reports to suggest that Ed Miliband could be a good choice. This is not only shared by the political experts and analysts but also by many bookmakers and punters.

However, his odd as of now is at 11/1 which is way behind that of the many front runners of the conservative party.

But given the fact that Brexit is working on the minds of the people, many punters and bookmakers believe that given his experience and status Ed Miliband could be the person.

However, it needs to be kept in mind that since 2010 Labor has been trying to regain lost ground in the United Kingdom.

It also would be pertinent to mention that the name of Clive Lewis often is pushed to the background by not only political analysts but also by many bookmakers.

As of now, many bookmakers are ready to give him an odd percentage of 7 is to 1, which might not be the best when compared to a few popular leaders of the Tories. But again 2018 is quite some way off, and things could certainly shift anyways within the next few days.

Hence, it would not be a bad idea to try and find out more about his background because he could be a dark horse not only as the leader of the Labor Party but also for the Prime Minster post of this country.

The above are just a few of the many leaders of the Tories and the Labor party who could be making headlines as far as the future of the next PM of United Nations is concerned.

However, it would not be a bad idea to try and have a closer look at many other names who also could give a run for the money for the big contenders.

Visiting sites like Paddy Power, Ladbrokes, and many others such political betting sites would certainly help in more ways than one.