The US elections Odds of 2016 has now had its presumptive nominees. Hillary Clinton, the former first lady, and secretary of state will be the Democrat’s torchbearer come November 8, while Donald Trump, the billionaire real estate investor, will be the Republican’s torch bearer on the same day.

Donald Trump has been the assumed Republican nominee after John Kasich, and Ted Cruz suspended their campaigns within 24 hours after each other at the beginning of May.

Even though Hillary Clinton won the required number of delegates to secure the nomination in the wake of the Democratic convention, her fierce opponent, Bernie Sanders, vowed not to bow out and instead he said he would take his election campaign all the way to Cleveland.

The outspoken Senator lost in the last primary, which was held in the district of Columbia on June 14, by a huge gap.

History of the American Election

In the history of the American election, this is going to be the most contended one, especially from a betting perspective with Hillary Clinton being the bookies favorite to become the POTUS and Donald Trump being the ridiculous long shot ever since he announced his intent of being the next POTUS.

After the June 14 primary, Ladbrokes US election odds put Hillary Clinton as the favorite at odds of 3/10 while Donald Trump was placed at odds of 11/4 of becoming the next POTUS.

Before we go deeper into the two horse race, it’s important that we have a quick look at some of the presidential aspirants who’ve dropped out so far.

Having all dropped out, we now have two main rivals, Trump and Clinton, who are running for the POTUS seat. With a few months remaining, the clash between this two is seen to be brutal.

How far have these two candidates come?

May 2016 was the first time since he declared his interest in becoming the POTUS that Donald Trump overtook Hillary Clinton in the average of the national polls conducted in the US.

Ladbrokes US elections indicated as of May 22 that Donald Trump was ahead of Hillary Clinton by a slight margin of 0.2% - even though she managed to recover the margin.

Before that, Hillary Clinton had held a huge double digit lead over Donald Trump, who was placed by the Ladbrokes US election odds as the outsider, but has since regained to close the margin to a mere 30% Donald Trump’s polling has actually come so close at one point to Hillary Clinton’s in October last year when he appeared on Saturday Night Live. 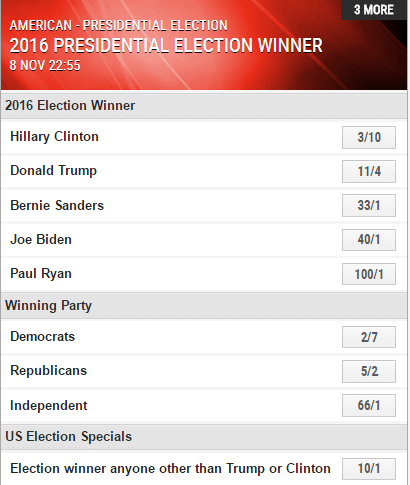 This coincided with Hillary Clinton’s appearance on the show and it put Clinton on the spot when she was asked a question on the deaths of four Americans in Libya in the year 2012.

Ever since then, there have been very few changes in the odds of the two with Trump still coming behind Clinton in most of the bookies websites.

However, with a few months ahead until POTUS Hussein Barrack Obama leaves the office, there are so may turns and twists that we are set to witness.

Why are the Ladbrokes US election odds so tight?

One of the reasons why the Ladbrokes US election odds are so close is that some of the Republicans are starting to back Donald Trump.

In the meantime, a poll that was conducted indicated that almost half of Bernie Sanders supporters would rather vote for Hillary Clinton instead of Donald Trump.

Bernie Sanders also polls against Donald Trump better when compared to Hillary Clinton. Almost 60% of Bernie Sanders say they wouldn’t vote for Clinton because she is not “Trustworthy and Honest.”

How about the US states?

As we head towards the final round of the presidential race, the Republican and Democrat candidates will go on a neck to neck race to win the 50 American states, with each of the states having a particular number of electoral college votes, based on the population.

This matters a lot, as the popular vote will not be as important as the electoral college vote. If the former state secretary’s campaign is boosted by the democratic states such as Cali, Illinois, New Jersey and New York, then the populous states could hand her the victory.

Swing states such as Arizona, Western Virginia, Ohio, Florida, and Carolina have the power to alter the elections. They are those states that switch between the Republicans and Democrats and so far, neither Clinton nor Trump has a significant backing in these states.

It has long been known that most of the bookies, including Ladbrokes, don’t go far wrong when determining the odds of the elections.

After the last general election result in the UK, most of the punters and die hard political followers lost their faith in the pollsters and would opt to look for the future results by looking at the various bookies results to foresee the future outcome.

As it stands, Hillary Clinton is the odds on favorite to win the November 8 election at Ladbrokes US election odds of 3/10. However, Donald Trump has odds of 11/4 of becoming the next POTUS having gained n Hillary Clinton from odds of 25/1 last year.

Clearly, Hillary Clinton’s win may not be assured but with the current Ladbrokes US election odds; we can say she is pretty likely to win the event.