There are a few countries where the general elections are watched with great interest and excitement. These countries include USA, United Kingdom, France, Germany, and of course India which is the largest democracy in the world.

The recent US elections evinced a lot of interest, and it was one of the most bitter and closely contested elections in the history of US democracy. Not many would have expected that Donald Trump to win the elections.

The Next Elections Is Just Four Years Away

However, it is all now history, and it will be only a few days before Trump is sworn in as the next US President. Hence as far as bookies and punters are concerned, the focus will now shift to the next US election.

There is no denying the fact, that millions of dollars are spent by tens of thousands of betters. While some do it for the fun of it, there are others who are serious about it and would like to make some money out of it. 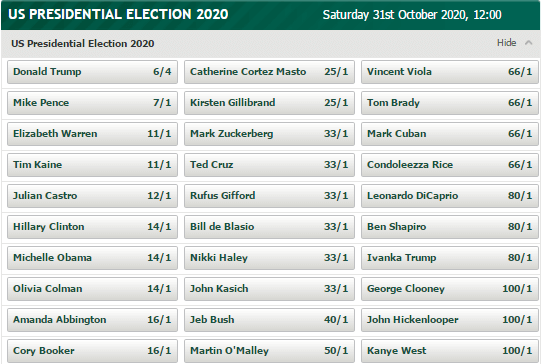 There are scores of online bookmakers and online political gambling sites which are there to help those customers who are willing to hazard a guess and stake thousands or perhaps even millions of dollars on such political gambling.

Paddy Power is one such gambling online outlet which is hugely popular amongst gamblers in the United Kingdom and other countries of Europe.

Hence, it would not be a bad idea to know more about Paddy Power US election gambling predictions and the odds which they have placed on parties and candidates. Let us have a look at the same over the next few lines.

Trump Is the Centerpiece

Though usually elections in the USA are fought based on two main parties, i.e. the Democrats and the Republicans, today everything seems to be centered around Donald Trump.

Hence, it would not be a bad idea to focus more on individual candidates rather than the two mainstream political parties. Let us get started by looking at the odds which Paddy Power has for this politician.

Donald Trump as far as the 2020 elections are concerned majestic 11/10 odds. This means that bookmakers and punters are reasonably confident that given the current scenario, Trump has big chances of becoming the President for the second term in running replicating previous presidents including Barack Obama.

However, it would be naïve to expect that things will remain the same because four years in politics in countries like the USA are too dynamic. 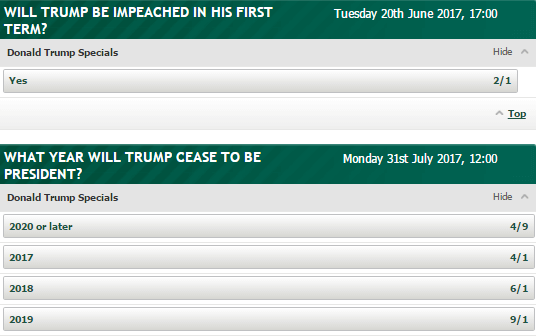 They can change pendulums quite drastically, and it would depend on how Trump can deliver on his promises which he has made to his countrymen.

He has been able to polarize the nation down the middle, and people will be watching him closely. Further, the margin of victory has been wafer think, and Trump does not have too much of comfort zone to play around with.

The next candidate to be talked about is Paul Ryan. He is the current speaker of the US parliament and belongs to the Republican Party.

He is a reasonably popular figure amongst the Republicans, but right now he is well and truly drowned by the Trump wave and euphoria.

Hence, it is not surprising when we find that he has an odd of 7/1 in his favor which certainly is not very encouraging.

But as mentioned earlier these are still early days, and therefore it might not be surprising if Ryan can claw up his way through and become a nomination for the 2020 elections and beyond.

But this again hinges on the performance of Trump and his Republican Presidency over the next four years beginning January 2017. So let us wait and watch for things to unfurl.

There are many Democrats who believe that the US Presidential election results could have been entirely different had Bernie Sanders won the nomination of the Democrats.

He has a clean record unlike that of Hillary Clinton who was mired in many controversies including the leaked emails when she was in Office. 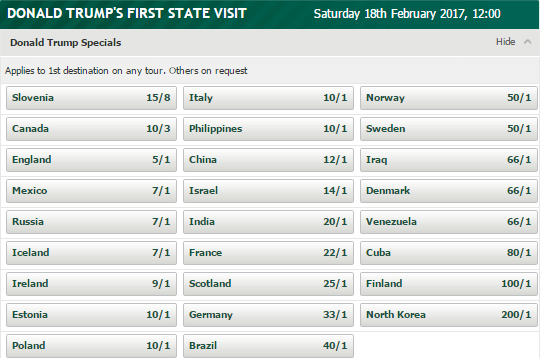 However, as of now, Sanders has an odd of 20/1 in his favor, and the biggest problem that he faces is his own.

In other words, he is quite old, and four years from now he would be around 79 years old and perhaps too old for Presidency.

But there are thousands who support him because of his image and clarity of thought and bookmakers might be willing to give him a chance.

Once bitten twice shy; this is what could be the story of Hillary Clinton. According to analysts and even the most experienced bookmakers and punters, Hillary Clinton lost a battle which was hers to win.

There could be many reasons attributed to it, and her past seems to be haunting her. Further, she also had some health issues and the pictures of her are literally tottering her way into the car with the help of security guards is there for all to remember.

Hence, she should consider herself lucky when bookmakers are ready to give her 14/1 odds. However, it remains to be seen as to how the punter and gamblers would like to take these odds as far as her candidature for the next election in 2020 is concerned.

The current vice president of the USA, this seventy-four year old, is a seasoned politician and per many he certainly stands a good chance as far as the next elections in 2020 are concerned. 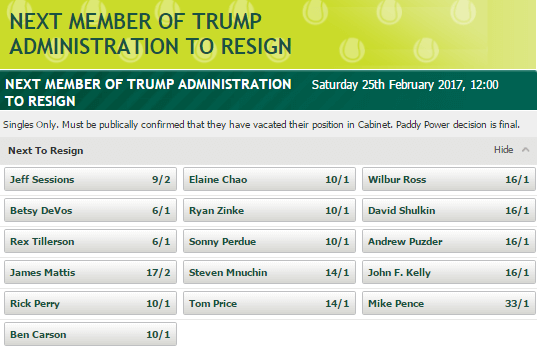 However, with an odd of 18/1, the outlook for Biden does not look too good, and it remains to be seen whether things will improve over the next few years. He will be hoping that Trump makes mistakes as he moves along the presidency over the next four years.

Though 2020 is quite far away, there are many who feel that the punters and bookmakers have become active again and money has started flowing again like water.